The RS4 has had its annual service - it can't get any cheaper than this. All it needed was an oil change, and I supplied the oil and filter. Fifty quid labour for the oil change and inspection, and the car was ready to pick up two hours after I dropped it off.

Does it get any better than that?

Doing it yourself in the comfort of your own garage in half an hour?

Not a chance. It's 46C and 90% humidity outside and I don't enjoy working on cars anyway.

Timely, err, timing on the gearbox stuff, I’ve just ordered oil & filter for The Touareg. It’s on 128k miles and I’ve no service history for it, so it may or may not have been done, and even if it has, I don’t know what was used, or when. As far as I’ve read these boxes are fairly reliable though. There’s a valve body issue that sometimes comes up but fortunately it’s not a gearbox-out job which keeps it down to just a three-figure bill.

As with the other boxes mentioned, there’s no dipstick here either. You pump oil in (with engine running and oil at 30 deg C) until it starts overflowing.

And as an update to the previous, it’s definitely running better now and the oil leak has reduced to a general moistness rather than actually dripping.
Top


Doing it yourself in the comfort of your own garage in half an hour?

Not a chance. It's 46C and 90% humidity outside and I don't enjoy working on cars anyway.

Exactly, it probably helps their arthritis as well

The Transit van has been sold, first to see will buy, and so it was. Fed up with wankers in my street thinking they live somewhere posh and complaining about a van being parked within 100ft of their house. Also it was a bit OTT for what I ended up using it for, so I'll probably get a T5 like everyone else has. I came out of it ok and pretty much got my money back not including tax and insurance.

The pattern exhaust I fitted to the Smart car a year or so back started blowing and leaking, so I secured a half reasonable OEM one for £15 and bodged it up with Gungum paste stuff where it had some holes at the outlet end. Obviously one of the exhaust studs snapped whilst I was changing it, then while I was trying to remove the stud using two nuts tightened aginst each other one of the nuts rounded and somehow managed to weld itself to the remains of the stud, so business as usual. Finally got the nut off the stud and just fitted the exhaust on the one remaining good stud, it doesn't seem to be blowing so the fucking thing can stay like that

The airbag light is on (passenger seat belt tensioner short to ground) and theres a metallic noise which may be the rear drums, but is intermittent. I will try and summon up enough fucks given to take a look at it next weekend. I am thinking about getting rid of it and buying a different shitter, it feels like I spend half my life fixing the poxy thing.

In other news, I gave a mate a lift to Dartford to pick up his new Tesla Model 3 on Saturday. It's very nice, I can definitely see the appeal.
Top

Combo needs a clutch now. Slipping, but only when cold. Spoke to my mate who seen this before, I knew it needed replacing as it felt horrid and the travel is right at the top of the pedal. Might just get one of the £100 SMF/Centre plate/pressure plate setups from eBay and get my mechanic to bung it it.
Top 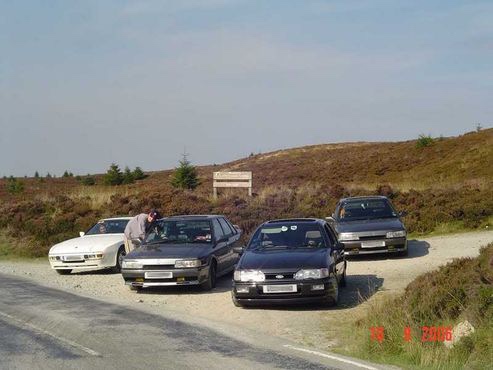 Cheers Mike, I enjoyed the good old days. I think that is why I am now in an exige - lightness of touch and raw feel. The MB was fast but none of those things
Top

Yes there is no level as such,the filler plug is the level and it needs to be done when hot, and obviously with the car in the air and level, and you need a pump to fill it as you fill from underneath.

I'll have a look under to make sure it's not leaking, but at the moment I'll just put it down to a temporary electrical glitch and see what happens.

I believe the valve body / mechatronic units need a power off and on reset of the ignition when they start to go funky and throw errors, usually accompanied by limp mode and the gearbox sticking in 2nd.

When we got back I left it running on purpose to see if it would come back to life after selecting neutral or park without an electrical reset.

It was the TCM at fault that caused it.
Top

All four coils have now been replaced on the Mini. I'm not headbanging involuntarily any more. It's been about £120 and rediculously easy to do. The Saab was £500 and a chunky job. I dread to think how much and how long it would have been on the 166.
I identify as a CUNT+.
Top

Cheers Mike, I enjoyed the good old days. I think that is why I am now in an exige - lightness of touch and raw feel. The MB was fast but none of those things


I know yours isn’t a V6 but last time I weighed mine at the local weighbridge it was the same weight as an Exige V6.
I’m sure your 21T was roughly the same so, yes, here’s to 80s flimsiness

I’ve driven a few 135i coops recently and they’re very quick ( esp with 400bhp ), very solid .....but you can ‘feel’ the extra lard through a roundabout
Top

Definitely my biggest complaint about the 330ci - it's such a lardy fucking thing. Sure, at speed it hides it's weight, but if you're braking towards a bend, suddenly it reminds you that theres over a ton and a half of metal there.

I think once 230bhp, a drop top and RWD gets too familiar, I'll be looking at something lighter.
Top

Definitely my biggest complaint about the 330ci - it's such a lardy fucking thing. Sure, at speed it hides it's weight, but if you're braking towards a bend, suddenly it reminds you that theres over a ton and a half of metal there.

I think once 230bhp, a drop top and RWD gets too familiar, I'll be looking at something lighter.

Wheelbase, and out of wheelbase weight, perhaps?
Top

Compacts have more of their mass within the wheelbase which helps them feel a lot lighter even if on paper there isn't a massive weight saving over a full size version.
Cheers, Harry
Top

Looking forward to the next two years with it!!
Top

I won’t bother with an EOTR because nothing interesting happened to it. I really liked it, it was the ideal fast family motor and I’ll miss the speed, handling and practicality. But I’m convinced that the Porker will make up for most of that.

Gave the Golf it’s 3rd and final wash in my care (I actually let the local east Europeans do it) and first ever interior clean. I also had to clean a scratch up on the back bumper:

It turned out to be mainly paint/plastic/rubber transfer so wasn’t too hard.

Internet Personality, Twitter Star and Instagram Influencer Richard Major reminded me to check my tyres, which were on my to do list but I’d forgotten. Weirdly, 1 was illegal and the rest had loads of tread. Mainly worn in the centre, which points to overinflation, I think, but it’s certainly never been overinflated by me. £40 later at the local back street garage and I’m the proud owner of an Apollo Aspire 4G (that’s a tyre, not a cheap Android phone). I feel a bit dirty but whatever.
Mo’ money, mo’ tard.
Top

A little over the 27.5k per annum it's supposed to be doing

Made it to the bottom of Spain in the M3: