Fair enough. They do go the softly softly route rather than a full on 12 months. whats the Porsche one you refer to?

It’s US only, and only come cities

You pay a monthly fee, with a couple of different tiers.

Then you can select any car in your tier, and swap it as often as you like. Maybe you want a Macan for usual day to day stuff, but then you fancy something more fun for the weekend? Porsche come to your house, collect one car and deliver another. You can swap cars as often as you like too

I'm doing something like this currently. It goes like this. You buy a Panamera, and then a nice friendly man comes to your house/office every couple of months and leaves you with a 718, Macan, Cayenne or Panamera (based on recent experience) then drives off to repair your car. Eventually.
Top

Matty wrote: ↑
Wed Mar 20, 2019 4:48 pm
The other issue is that both Sony and Microsoft have their own models in the pipeline too - so I can imagine it'll be looking like Google = PC games, and the consoles offering their respective titles.

There are rumours they may try to make it free, subsidised with adverts....

Alternatively it could be another Google+, Google Glass, Google Fiber....


Looks like you’ll need a 25mb/s connection to play. Lot of people won’t have that sort of speed available all the time. Especially families where a 36 or 72mb/s line is being shared by multiple people.

Bits Vs Bytes is hard sometimes 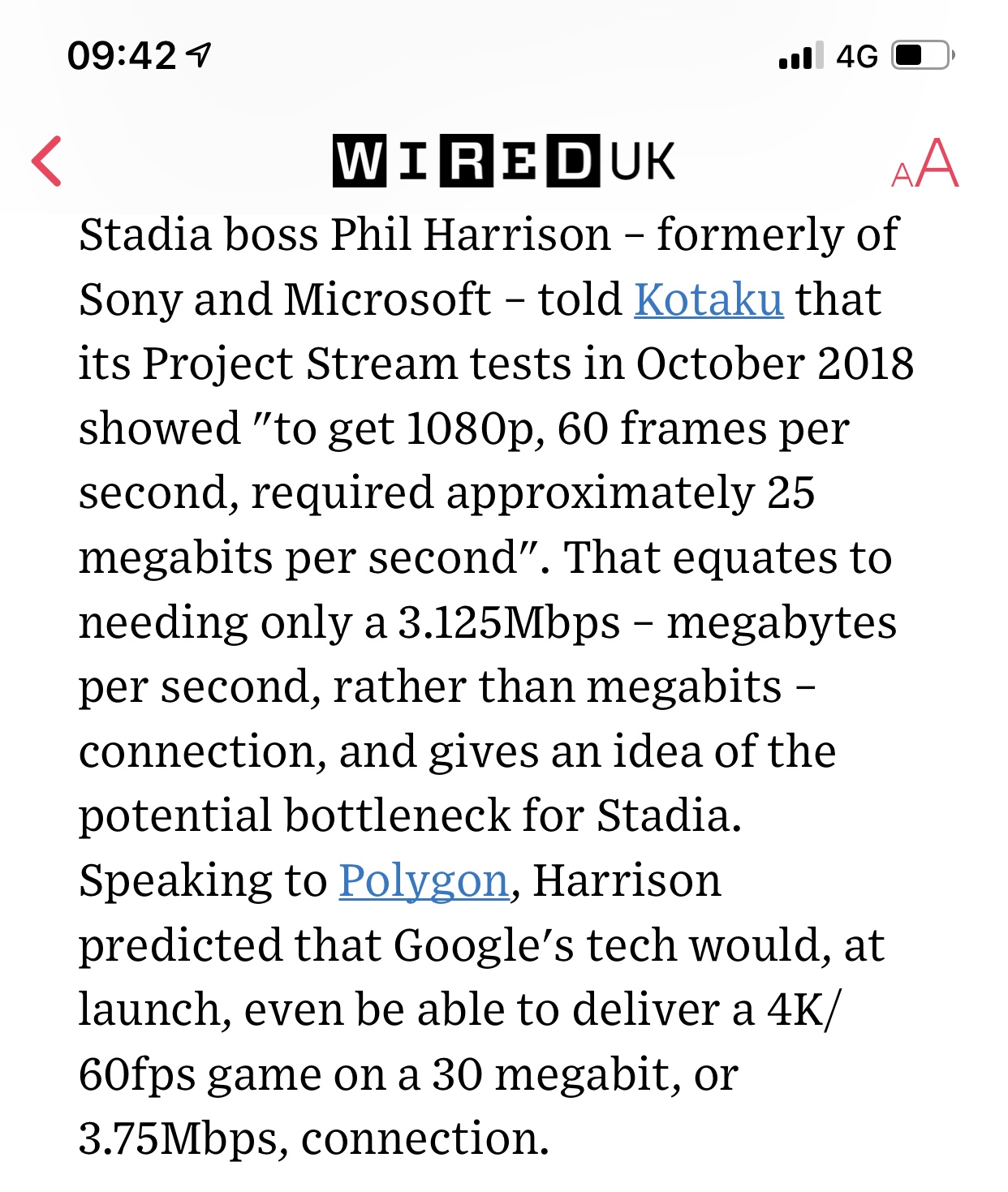 Although, I think the original bit/byte people could have branded better
Top

Crikey, even Wired getting it wrong.

It’s US only, and only come cities

RobYob wrote: ↑
Wed Mar 20, 2019 4:51 pm
Going to be interesting how agressively priced this is going to be. Google could smash new console sales if it was £10/month.

Called it, £9/month for Stadia "Pro" that gets access to a catalogue of games including Destiny 2 + DLC and new game discounts (will be very interesting to see how much) Release in November, I expect the advertising to be tsunamic.

MS and Sony will be up against it to get new consoles sold if Google can solve the latency issues.

1. Latency. Beta impressions claim it to be "playable". That's not good enough, IMO unless you play RTS games.
2. Limited games. Even if they get 70% of publishers/developers, if I game I want falls into the 30%, I'll still need my PC
3. It's Google, a company who drops things the instant they get bored and I've got very little faith in. What happens to any games I've bought through Stadia?
4. Sony and MS (who are apparently teaming up for theirs) is gonna hit them hard.
5. The free version must have some underlying monetization. Advertising? Data mining? How intrusive will that be?

I still don't understand who it's aimed at. The latency issues will rule out anything competitive or reactionary (which makes up a huge portion of the PC space) and unless you can play 100% of available PC games on it, it'll never replace your desktop/laptop. Maybe it's worthwhile for casual PC gamers who only have a nice interest in certain games.

On the consoles, I'm all for it - if I can pay £15 a month to play my XBox anywhere in the world (maybe without buying a console? Thats awesome. It's a walled garden of which you'll get 100% of, so it works.
Top

Well launching with Destiny 2 the headliner they must be confident on latency, goodness knows how but...

Agreed, limited games could screw it although Google have some muscle to bring publishers into line.

As for owning games beyond the life of the service o guess unless Google itself goes under you should be right but who knows.

Free version you buy the games without discount and limited to 1080p.

However it ends up, it'll certainly be an interesting 2020 for gamers.
Top

Well the stories from E3 about Stadia have been very positive - especially on games like Doom, which is very fast paced. That's a good thing, it shows the tech works.

However, the key issue is that Google were asked by testers if they could run speed/latency tests in the controlled environment they were playing in...and Google refused

I hope your routers at home have a QoS setting

Well Stadia is a total success!*

*If you don't count the unplayable lag on anything other than a leased line, the terrible lineup and awful cheapo controller

Surely releasing it in that state will just do more harm than good?!
Top

I read somewhere that 5G is way faster than the fibre network, could they just be anticipating that rolling out into home internet?
Top

I tried remote play on my iPhone which was connected via my own network to my PS4 also on the same network - still a laggy mess so I don’t have high hopes for Stadia.

I guess it doesn’t matter for games with a high ping but that’s a very niche market as everyone wants to play online now.
How about not having a sig at all?
Top

Hmm. I’m just looking at online reviews. If it has a good refund policy I’ll bite as I have a gigabit cat6 line in my flat but £120 is a lot for an experiment and the games library is very limited.
How about not having a sig at all?
Top

duncs500 wrote: ↑
Wed Nov 20, 2019 8:46 am
I read somewhere that 5G is way faster than the fibre network, could they just be anticipating that rolling out into home internet?

The problem they have is that there is a massive difference between a 50mb leased line (that most business have) and a cheap 300mb VM home circuit, and it's difficult to make that clear to non-tech people in terms of specifications for the product.

To the layman, the 300mb VM circuit is better, but that's not the whole picture - jitter and latency are absolutely critical for Stadia. Shitty home broadband usually has pretty poor ping/latency, so it'll run like crap.

As for 5G, potentially yes. A quick Google suggests one of the aims for 5G will be ultra-low latency, which could massively help streaming services. The issue you'll have instead is that I suspect 5G will (like 3G, 4G, etc) have data caps, which Stadia/XCloud/PSNow will munch through in no time!
Top


As for 5G, potentially yes. A quick Google suggests one of the aims for 5G will be ultra-low latency, which could massively help streaming services. The issue you'll have instead is that I suspect 5G will (like 3G, 4G, etc) have data caps, which Stadia/XCloud/PSNow will munch through in no time!

Join us, join the Teslarati!
Top

If you could get a cloud based gaming platform tied to a sub service like the one I have on Xbox I’d be interested. As it is, who’s going to pay full retail for games you won’t have access to when Google Bin this in a year.
An absolute unit
Top

If you could get a cloud based gaming platform tied to a sub service like the one I have on Xbox I’d be interested. As it is, who’s going to pay full retail for games you won’t have access to when Google Bin this in a year.

After seeing the subscription price I was quite hopefull of a game changer, the execution of a very limited catalogue and high upfront price is a bit baffling. What were they thinking
Top

I think it’ll be popular with the kids, way cheaper than a games console and if they’re young enough they won’t give a crap about the lag

How about not having a sig at all?
Top
Post Reply
52 posts