I know there was a pretty lively thread on this on the almost deprated forum, so I thought I'd start one here.

The basic game is very cheap on PSN just now. Worth getting for a console casual or do I need a VR headset and twelve joysticks to really enjoy it?
An absolute unit
Top

Not sure about lively it was mainly Ilmostro and I the last few months.

There are A LOT of controls but I play on PC with a Steam controller mapped with a few modifiers + kb&m for backup.

If you're used to lots of functions mapped to a controller it'll probably be ok, there seems to be quite a few console players on the subreddit.

I'd say if you'd think you'd enjoy flying around enjoying the spectacular views with a bit of light trading/combat/exploring on the side it can be pretty casual. I only ever play on the weekend, PVE is quite approachable. PVP is a whole other ballgame though.

No regrets spending £16 on the base game + horizons dlc.
Top

Now that I can reply, cheers

It's a place you go to talk sh!t, and generally get away from things. Much like the pub, only not so fvcking expensive!
Top

So I bought it and I’m rubbish at it

. Can’t even get through the combat training mission.
An absolute unit
Top

. Can’t even get through the combat training mission.

Welcome to Elite Dangerous where half the fun is looking up solutions on third party sites!

There's a reddit
The much more popular Reddit (frankly I only just came accross the above alternative now and have never Read It, usual historic Reddit schisms I assume)
The Official forums

The combat training is of course legendarily tricky, coz reasons.

The utterly indispensable Inara which I use to track this weeks Community Goal, Reference Engineers (if you bought Horizons?) and materials.
The even more indispensable Elite Dangerous DataBase for finding what you need.

I would recommend Ignoring most of that for a while and enjoy exploring the basic game. I think playing in Open is better than Solo/Private because 90% of the interactions with other players are positive. However, some (well 3 in my case in 300hours of playing) will just try to kill you on sight (generally referred to as Murderhobos/Gankers as genuine pirates are after your cargo and are much more fun (but rarer still) to encounter). Jump a few systems away from the starter system (Seal clubbing is sadly also a thing in ED) and find a system in Boom (will be reported in the top right panel just before you jump "Boom reported" " Famine reported" "Civil war reported" etc, in a boom system many factions will want you to transport data to nearby systems and this is a great way to start making money even in your basic Sidewinder.

One thing to note is the more missions you run for a faction the more lucrative missions you will be offered, so the payments will start small but once "friendly" or "allied" they will be much bigger. Another trick is to "stack" missions, finding lots of data or cargo going to the one place (you can even restrict your choice to one station to save time in supercruise and docking) and load up with as much as you can carry, rinse and repeat, that is where Boom data is so useful as it takes no space and you can fill your 20 mission limit (coz reasons) with paying data.

At the moment my 300hours has got me three fairly well outfitted (but lightly engineered, a whole extra level of upgrades but very grindy) ships; Sidewinder, Cobra Mk3 and a Python and a bunch of modules to kit them out for whichever task I want to do. This week I've joined the Mining community goal which involves carving up asteroids and fighting the occasional NPC pirate.

Not actually played for 3 - 4 weeks due to being to busy with shit.

It's fucking hard, I'm just about getting my head around the physics of flying now. I managed to dock and leave from a station without blowing up the other day

Still not sure what I actually want to do with it yet, I guess the best way to start is with trading/courier jobs to build up your funds? I'm just trying to stay out of people's way just now as I'm still shit at combat.
An absolute unit
Top

You don't get an instruction booklet or much in the way of guidance.

You need to figure it out for yourself.

Or just sub to a load of YouTube channels and watch them!

To be fair having ship insurance (Never fly without Rebuy!) Made most of my stuffups amusing rather than annoying... Most.

Interesting article on Reddit about gaming the Background Simulation, which might be handy for easily getting enough rank to unlock facion stuff like Prismatic shield and Packhound missiles.
Top

Yeah, that's why I'm thinking to hedge my bets and build my money up/improve my ship before I go wandering.

I assume you'd want to avoid ending up stuck in a hostile system with a dead ship and no credits?
An absolute unit
Top

Yeah - if you play in open, it's all emergent gameplay.

You just do what seems like a good idea at the time.

Stick in the free Sidewinder, build up some cash, learn the ropes, then take your pick.
Top

I assume you'd want to avoid ending up stuck in a hostile system with a dead ship and no credits?

You always get your basic "suicidewinder" back no matter what and that transports to you back to the beginner system (btw did you buy Horizons?) So getting stuck isn't anything to worry about. Getting a really nice ship and not having enough in the bank to pay the 5% insurance is the worst thing you can do.

After running boom data enough you can upgrade to a Viper or Cobra, I went Cobra because the minor loss in defensive combat performance compared to the Viper is vastly offset by being much better at everything else. A Cobra is so upgradeable and flexible it's pretty much an end-game ship once fully engineered.

Here's a Cobra taking on an Imperial Cutter, one of the Big Three showing what engineering and skill can do.
Top

Glad I kept my Python multirole after being jumped by four eagles in a wing after my load of Palladium and Painite. Could do with some Prismatic shields really.

With any luck I'll unlock another couple of Engineers over the weekend.
Top 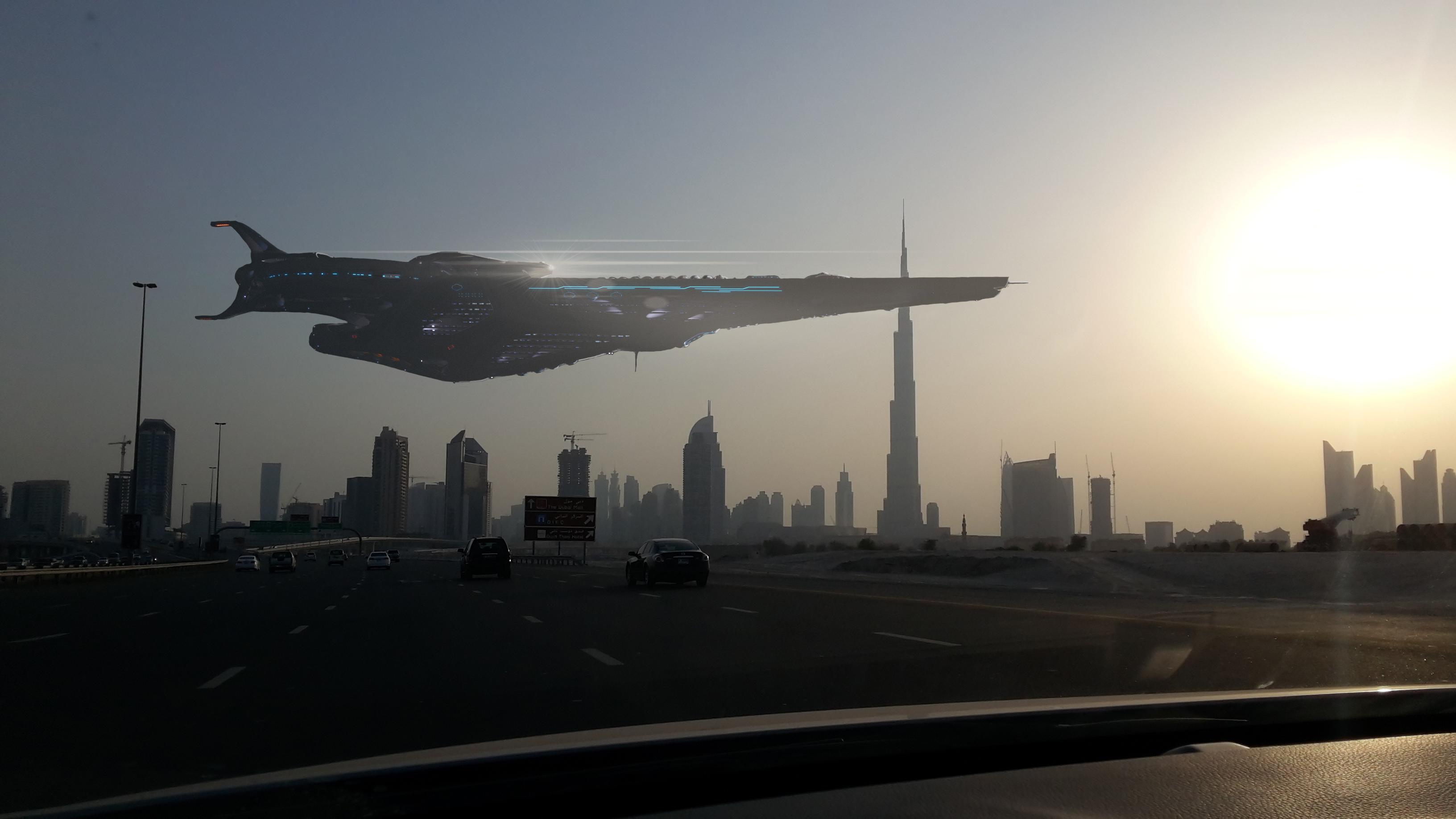 The Imperial Interdictor is 2km long. It dwarfs anything you can fly in the game but they do jump into conflict zones to settle the argument occasionally. 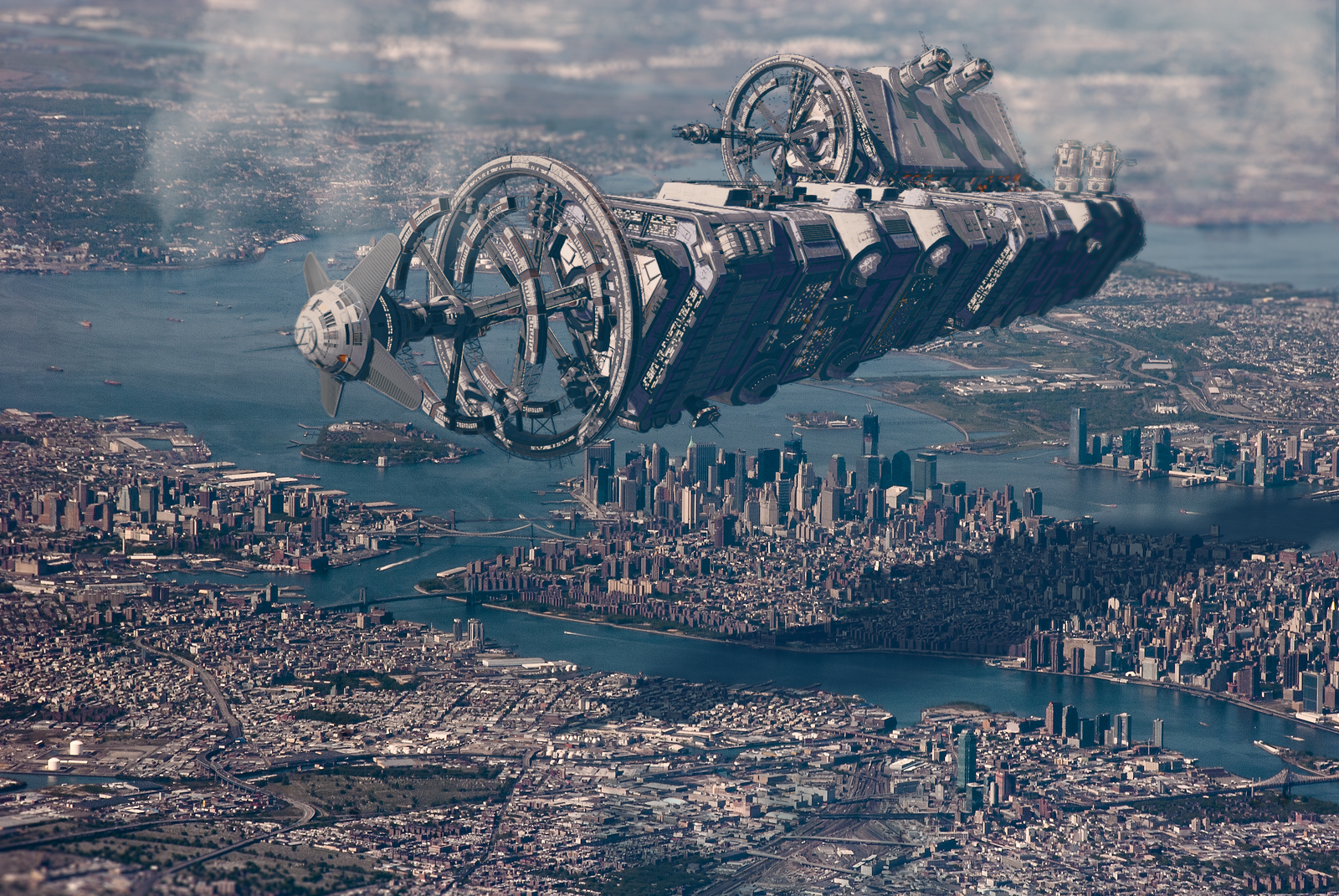 And even bigger Megaship over New York.

The Imperial Interdictor is 2km long. It dwarfs anything you can fly in the game but they do jump into conflict zones to settle the argument occasionally.

And even bigger Megaship over New York.

Capital ships are a must see!

The basic game is very cheap on PSN just now. Worth getting for a console casual or do I need a VR headset and twelve joysticks to really enjoy it?

Is this available on PS4? I did not get the memo!