The Thrill of Leasing EV's

Considering a new watch, down to two options: GA-2100 (same version as Jody has) or a Seiko SNE497P1

They're about the same size, but the Seiko is more than double the weight and four times the cost, but I'm tempted.
---
Driving a Galaxy far far away
Top

New 36mm Explorer launched today looks, well, like a 36mm Explorer! Interesting that they downsized it from 39mm to 36, I (and I think everyone else who has an interest in these sorts of things) expected it to go up to 41mm to match last year's upsizing of the largest Oyster Perpetual from 39mm to 41. I'm really surprised they went this way, I think 39-41mm would be more appealing to more people.... Wouldn't be surprised if next year they launch a 41 to sit alongside it.

Over the last six months asking prices for the old 36mm Explorers got ridiculous (now ranging from £5.5k up to £8k or so) so will be interesting to see how these are impacted by the new one. I'm sure the 39s will rocket up now.

All the hype was around the Explorer II because this is it's 50th anniversary year but the new one looks almost exactly the same as the previous one.

I saw about the new explorer as well

Does it now have the glide lock clasp?

As much as I love them, my head said that (until this new version) it was kind of money for old rope...
Top

No glide lock on the new Explorer 1, they're reserved for the dive watches and would be too thick a clasp for a "small" watch. It does have the easy link 5mm adjustment.

Glad they didn't change the Explorer 2 too much, the white polar dial is crisp, hope to pick one up this year.

Oyster bracelet back on the GMT Pepsi and Batman. Still next to impossible to get either one at retail.

Overall, a boring year from The Crown but I'm not surprised cos they won't keep up with the demand. There was a lot of speculation about models being discontinued, like the yellow gold John Mayer Daytona, but that didn't happen and a lot of second hand dealers were driving up the prices weekly.

Interesting releases from Tudor. The slightly thinner BB chrono is the winner for me, preferred the black dial initially but the white opalene dial is growing on me. The silver case BB58 is cool, apparently it'll not tarnish, a bit pointless to put a display caseback to show off such a boring movement. And for the wealthy, you can buy a £12.5k solid gold BB58 lol.
M235i
Top

I had a nose through Rolex’s new offerings. The Datejust 36 is available in some rather nice variations. The green palm dial is interesting but not something I’d buy; but if you change the material of the watch the colour of the palm dial changes too. In Everose and steel with smooth bezel and oyster bracelet, I think it looks amazing: https://www.rolex.com/watches/datejust/ ... -0032.html

Not that I’d have that one... still love the Yachtmaster 40mm with Rhodium dial. But I’d probably buy a Sub Date if the blue bezel was available on steel.
Top

They work and look just fine. Finishing isn't top notch, but they were a tenner each!

Update on my Jobbo spec strap, I still like the look of it but I'm not finding it that comfortable. I've persevered thinking it would wear in a bit but it hasn't. Ordered my first Nato to give that a try.

Funny you should say that Duncs - I looked in my watch box this morning at the four in there on lawr389's straps, and the one on my wrist, and realised that there was one which was barely worn. I put it on briefly and it's nice leather but a bit thick, so I'm going to look for another. It's also the only 22mm strap I've had from him and since they don't taper that might be part of the reason.
Top 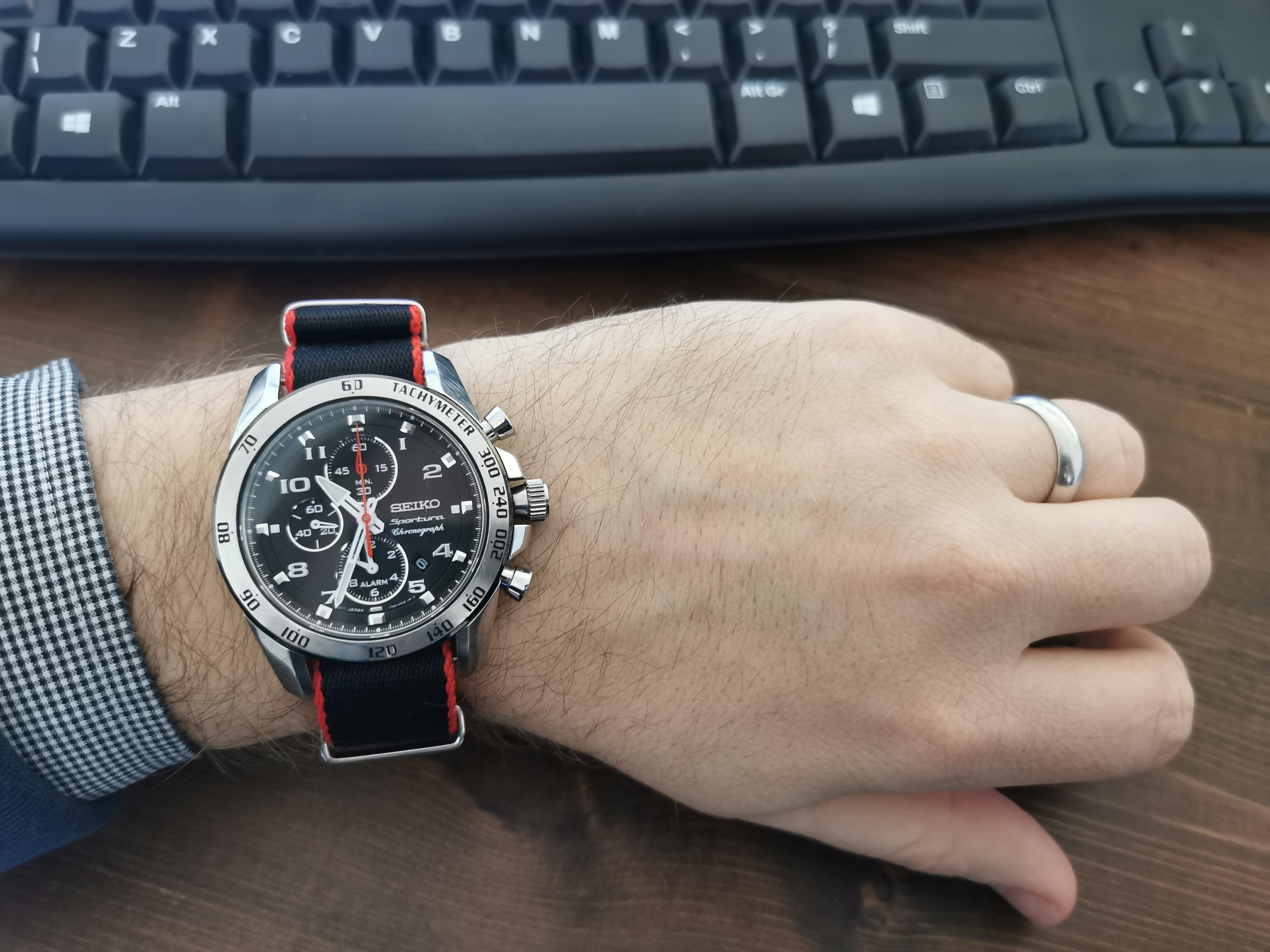 Now with NATO. I hunted down a strap that had a similar essence to the original leather strap which had red stitching down either side.

I'm pretty pleased with the result, comfy too. Ordered it from a company called WatchObsession (purely because they had the style I was looking for) around 9am yesterday morning and it arrived today so can't argue with that.
Top

That looks great. Is it a seatbelt type NATO? I have a similar one with grey either side bought from Timefactors (the shop run by the chap behind TZUK) - https://www.timefactors.com/products/tf ... ato-straps
Top